Our passion, your pleasure.

The work of the Vine

From November to February

This is the period when the vineyard is at rest, but at December begins the pruning.
The type of pruning is the single or double Guyot pruning. From it depend the quality of the harvest and the yield but also the health of the vine stock. This is a delicate work, usually entrusted by qualified personnel.

Pulling the wood: the wood is either disposed on the ground to be crushed or burned in small wheelbarrows in the hills. 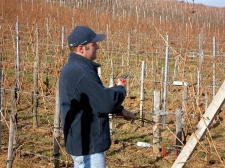 From March to May

The « Caraçonnage”, or repair: it is the replacement of stakes and the checking of the tension of the wire who bear the twigs (and if appropriate, their replacement).

The binding: work that consists in folding up the vine shoots on the lower wire.

The ploughings: they allow the loosening of the soil to aerate it and facilitate the penetration of rainwater, and the burial of fertilizers and organic materials. During growth, ploughing is executing every second row to eliminate weeds. In the other row, we sowed rye in November, to allow a better aeration of the soil. This will be crushed in May, when it reaches a good height, in order to be changed into a green manure.

The « Racotage »: it is an operation which consists of replacing each year the dead vines.

Removal of surplus shoots and disbudding: this work consist to remove unnecessary buds and remove the "greedy", that is to say, to cut unproductive young shoots. Around May begins the protection of the vine against diseases. When deemed appropriate, each intervention in the vineyard is done by applying the principles of organic viticulture in the cares of the environmental.
In addition, a tracking system has been set up with all our grapes suppliers for better control.

From June to September

Tie up: Manual operation that involves raising vegetation along wires, so that the vine has a better sun exposure.

The trimming or pollarding: operation that consist to remove the ends of branches on the top and on the sides, to prevent the nutrients from the vine to go to the ends, to the detriment of grapes.

Green harvest: sometimes it is better to eliminate the surplus grapes in some plots in order to reduce the quantity of the future harvest, but also improve the quality and reduce the risk of bursting berries and rot during a rainy period.

Leaf removal: this process begins in August and involves removing the leaves around the bunch of grapes to allow more sun and better ventilation. It continues until September, allowing facilitating the work of the future grape pickers.

The harvest: the date is fixed according to the maturities. Many samples are made to appraise the sugar content.

We carry out the grubbing of old vines and the extraction of a maximum roots, in order to proceed to the loosening and the clearing of the soils for future planting of spring.